One of the largest real estate developments in the city’s history is being planned on the Scioto Peninsula, a $500 million project that would bring residences, restaurants, offices and more to undeveloped land in the shadow of the downtown skyline.

Long a subject of revitalization discussions, the once flood-prone peninsula at the eastern edge of Franklinton is ready for a major investment, said city officials and representatives of nonprofit developer Columbus Downtown Development Corp., which is spearheading the initiative. 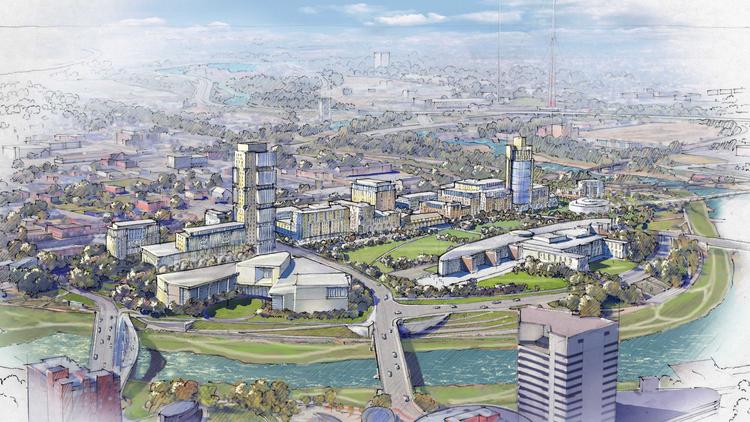 A $500 million plan for the Scioto Peninsula would bring residences, restaurants,… more

A master developer is being sought to help bring the expected 3.1 million square feet of commercial and residential development to reality.

In a request for qualifications released Friday, CDDC detailed its vision for the site of the project, which spans the length of the peninsula from just beyond COSI to the railroad tracks to the west.

“We’ve been discussing this as a community for literally over a hundred years – this site has been planned numerous times since 1908,” CDDC CEO Guy Worley told me. “This would be the largest development in the history of the city, so it’s a huge opportunity. It’s the best piece of ground in our city, if not the state, and it has the best views of our city skyline.”

New life for the area

CDDC, which helped breathe life into the riverfront with its recent Scioto Mile park project, is leasing the 21 acres targeted for development from the city and Franklin County.

Plans call for a pair of 30- to 35-story residential towers book-ending the site at Broad and Town streets. Worley said the towers, likely condos, “really kind of set the stage for the entire development.”

Retailers are envisioned lining both sides of a new Main Street to create a walkable shopping, dining and entertainment experience.

Above the retailers on the east side of the street, overlooking the Scioto Peninsula Park under construction, would be seven to nine stories of more apartments or condos.